Set aside time for preparation

We could have broken this one up into three separate tips because there’s so much to cover here, but we decided to make this one super-sized tip instead. The short version: Always prepare for an interview. Now let’s dive into the longer, more detailed version.

The first portion of this applies to any interview, whether remote or in-person. You should know beforehand what questions you want to ask. Look over the candidate’s resume closely and choose questions that will clarify and amplify your impression of the candidate. For example, there might be a job on the candidate’s resume that you want to know more about. You should make note of that so you can ask them to explain it in more detail in the interview. You’ll have to put in some prep time to make sure you’re asking the right questions, but it’s worth the effort.

The second portion of this tip applies to the tech side of things. Make sure your technology works. Test it with your colleagues to make sure there are no audio or video issues. Perhaps the app causes a slight delay – you’ll want to be aware of this before the interview so you know to expect the applicant to be a little slower than normal to respond. And we can’t emphasize this enough: make sure you communicate which app you will be using (Skype, WebEx, Zoom, Discord, etc.) to give the applicant time to get it installed and tested as well.

The final portion of this tip is about time management. All of the things we’ve mentioned take time, so you will have to set aside a portion of your time so you can focus on them. Preparing questions will take time. Installing and testing your app will take time. If you haven’t scheduled prep time before the interview starts, you might be setting yourself up for failure.

We can’t understate the importance of preparation.

Use your app’s video feature

One reason a lot of interviewers prefer to meet in-person rather than digitally is because an interview is full of visual clues about a person. The way a candidate dresses can tell you how good they are at preparing for work in a professional environment. A person’s body language and facial movements can tell you how engaged they are in the interview, or if they’re tuning you out. A relaxed posture displays confidence, while fidgeting expresses nervousness. These are all important clues that you can glean during an interview. That means you should make sure your interview happens via video chat.

Obviously, a remote interview won’t replicate an in-person one with absolute fidelity, but there are dozens of important visual signals that take place over the course of an interview – you don’t want to miss out on those.

Just make sure you’ve communicated with your applicant and let them know this would be a video interview so they know you expect them to be prepared.

As a follow-up to the previous tip, you’re getting a lot of visual feedback via video chat, and you need to use that to your advantage. Pay attention to how the applicant dresses and how they talk. Inspect their background to make sure they’ve decluttered before the interview – a sloppy background might be a sign of a disorganized individual.

Pay attention to what’s happening in the interview. Take notes (and make sure your notepad is off camera so your applicant can’t see what you’re writing about them). Look for signs that the person might be the right (or wrong) person for the job.

You’ve got a lot of visual data to take advantage of here. Make sure you’re using it.

We said this in our previous interview tips article, but we’re mentioning it again because it’s crucial to the success of your interview. If you’re conducing an interview, you need to dress the part. If you aren’t willing to dress up for a remote interview, then it’s simply unfair to expect your candidate to do the same. Additionally, by not dressing up, you’re presenting yourself (and perhaps even your company) as unprofessional. While some interviewers prefer to dress casually because they believe it causes the applicant to be more relaxed, casual attire during an interview has long been considered a red flag for both interviewers and interviewees.

A job interview is a professional meeting, and technology doesn’t change that. You need to dress professionally. 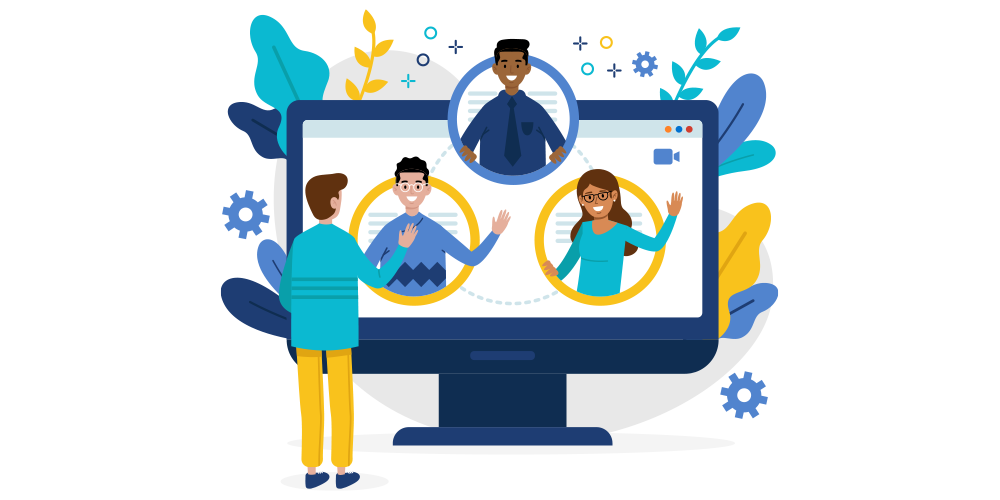 There is no reason to consider an interview to be a one-on-one meeting. Feel free to bring in other members of your team to assist you.

Of course, you need to keep in mind that the more people you add, the more likely it is that you’ll encounter technical difficulties. Consider everything we said in the first tip here, and make sure you’re prepared. This might even mean doing a practice interview with everyone who will be assisting you with your interview. Also consider that adding too many people might make the applicant feel overwhelmed. There’s no reason to bring in a dozen people when two or three could do just as well.

Choose only the people you trust, and make sure your interviewing partners have skills that complement your own, or who fill in gaps in your own skill set. For example, you might be incredible at conversation, but you’re interviewing a candidate for a position that you don’t know a lot about. In this case, it would benefit you to bring in someone who knows the position very well to fill in some of your knowledge gaps and prevent you from miscommunicating with the applicant.

While you don’t need to bring in your entire team, it does benefit you to have a partner or two to help make the interview a success.

Listen to the candidate; don’t talk too much

This will apply to in-person interviews as well, but you should always make sure you spend a good portion of the interview listening to the candidate speak. An interview is a two-way conversation. If you spend the whole interview talking, you won’t have a chance to feel out the candidate’s responses.

We’ve said this before, but experts recommend that hiring managers should do about 30% of the talking in an interview. That means you should spend a majority of the interview listening instead of talking.

There are many benefits to conducting virtual interviews. For example, you’ll have access to a broader pool of candidates, and you can also continue interviewing in times of crisis. With the six tips we’ve listed above, you should be ready to upgrade your interview process to meet the expectations of 2020 and beyond.